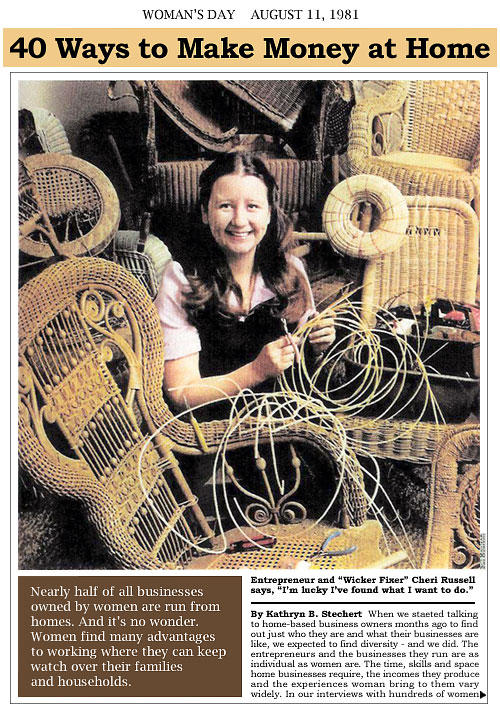 We were lucky enough to have provided several Antique Wicker pieces that were used in the movie “Mr. & Mrs. Bridge,” starring Paul Newman & Joann Woodward, filmed in Kansas City, Missouri.

We have been listed in Richard Saundersbooks, one of which is “The Official Price Guide to Wicker,” in fact, Richard purchased an Antique piece we had restored for his wife as a gift.

Cheri was featured in the 1981 August issue of “Woman’s Day”magazine.

We have been blessed to be in several other magazines, newspapers, radio talk shows and TV news features over the years.

We have restored 1,000’s of wicker family heirlooms from coast to coast. We look forward to restoring your heirloom.

We have a saying:

They are our best customers!

My name is Cheri Russell and I started the Wicker business in 1976 in Cocoa Beach, Florida. Later, when my husband Mike and I moved to Washington State, he joined me in performing the repairs. In 1981 we moved back to my hometown of Ozark, Missouri, a small town South of Springfield and North of Branson, and have been here ever since. We really love it here on the family homestead.

We live on my family’s “Missouri Century Farm” and do our Wicker Restoration and chair caning here. This farm has been in my family for over 100 years. On Sept 7, 2019, the farm will be 166 years old and is known as a Sesquicentennial Farm.

For years we did all of our wicker repair and restoration out of our old log barn that was built by my family in 1853. It was the oldest standing log barn in Christian County until it burnt down on black Friday in 2011. They say a mouse decided to chew into an electric cord causing a short in the electrical wiring and the barn was consumed by the flames in just 45 minutes. 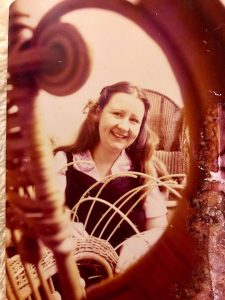 The barn was full of all our first custom wicker pieces, which we had designed and made, as well as our private collection of antique wicker.  It was also full of my family’s treasured Heirlooms. It was very heart breaking! We added a workshop to our family home, where the major to minor wicker surgery is performed up to date. However, we would like to rebuild the Log Barn someday.

Arianna does pickup and deliveries, painting, cleaning and minor wicker repair and chair caning, as well as being the social media and website manager. She was born during a craft show in Ozark, Missouri on Oct 4th 1987. I went into labor on the square of our small town at the time. Everyone kept telling me to go to the hospital, but why when I was fine? The next day I went to the hospital when I was in labor, had Arianna and then the next day went back to the show to show her off. So one could say she was literally born into the entrepreneurial business.

My youngest son, Heath, has gotten more involved over the past several years with doing minor to major surgery like Mike and I do. His favorite thing is seeing the before and after of his work and saving family pieces.

Ozark isn’t just our home, but it’s the most beautiful place in the country. If you’re up for a trip, come visit Branson or Springfield to bring your wicker pieces to us to restore.

We look forward to restoring your pieces and keeping as much of the original wicker as we can.